Do not expect to find federal regulations before the first Federal Register was published on March 16, 1936.

The government first began publishing federal regulations following a particularly embarrassing incident in which an oil company sued the federal government to overturn various oil industry regulations. After over two years of litigation, the case reached the U.S. Supreme Court, where it was finally noticed that the government had actually repealed some of the challenged regulations before the oil company filed the case. No one else had previously noticed this- not the attorneys for the oil company, not the lower federal judges and their clerks, and not even the government itself. Panama Refining Co. v. Ryan, 293 U.S. 388, 412-413 (1935).

In other words, before 1936, even the government itself could not track down its current regulations. You should not expect to be able to track them down over 80 years later.

Finding Federal Regulations at a Specific Point in Time

If you need to know the text of a regulation at a specific point in time, it's easy! Complete scans of all historical copies of the Code of Federal Regulations are readily available online. You can easily browse to a specific regulation or search within a specific year's regulations for relevant topics.

You can access complete copies of the Federal Register, from its very first issue to the present at:

Access the regulation in the CFR on Lexis or Westlaw.

Scroll to the end of the regulation to find two sections: 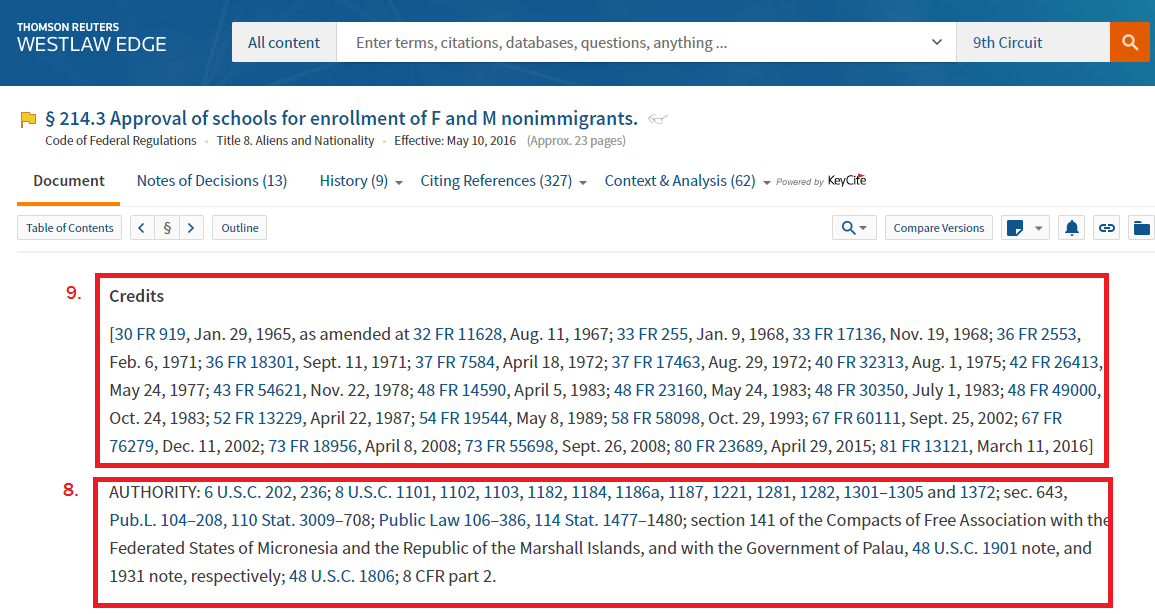 Skim the first few paragraphs of each potentially relevant Federal Register to see what the amendment did. Often, you'll find that many of the cited Federal Registers made only minor changes, such as fixing typos, or changed language that does not impact your client, and therefore do not require any further research.

It's common for agencies to post additional information about regulations on their website, either voluntarily or as part of their library of Freedom of Information Act (FOIA) requests.

Often, the Federal Registers will provide you with links to relevant pages on the agency website. However, unless the Federal Register is very recent, it's common for the links they provide to no longer work. If this is the case, check for an archived version of the website by copying and pasting the link into the Internet Archive's Wayback Machine:

Regulations.gov is a website that is intended to provide a forum for the public to submit comments and for agencies to post comments they have received. Again, often the Federal Registers will provide you with a link or instructions for locating the relevant regulations.gov page.

Regulations.gov can also be searched directly at:

However, be aware that many agencies are very slow to post comments received to Regulations.gov and do not post all of the comments. For example, the Centers for Medicare Medicaid Services (CMS) proposed regulations regarding Certain Preventive Services Under the Affordable Care Act (Docket ID: CMS-2012-0031) on February 6, 2013 but did not begin posting comments it received until May 1, 2013 and, as of January 22, 2019, has only posted 165,228 of the 472,082 comments it received. For full details, you may need to contact the agency.

Sometimes, the only way to get the materials you want is to contact the agency directly. The Federal Registers will always include the contact information for the person responsible for providing information about and receiving comments on the regulation and will generally provide information on where and how the public can request files related to the regulation. For example, a Federal Register for the regulations regarding Certain Preventive Services Under the Affordable Care Act (79 Fed. Reg. 51118) provides contact information for four agency staff members and explains how to request access to view materials at the agency headquarters.

Check the Office of Information and Regulatory Affairs (OIRA) Website

OIRA is responsible for supervising agency rulemaking and its website may provide relevant materials:

Sometimes, you will be able to locate law review and newspaper articles written by those who opposed, supported, or were involved in the enactment or amendment of the regulation. For information on searching law reviews and newspapers, try the following guides: