The fastest way to collect all of the citation information for a case is to highlight the specific text you would like to cite and use the database's copy with citation feature. (See Video tab.) This will provide you with all of the information you need to cite the case but it will not be properly Bluebooked. In particular, you should check:

Alternately, you can find most of the citation information you need at the top of the screen on Lexis and Westlaw. (See Screencap tabs.)

Finding the Pin for a Case

A pin cite (also called a pinpoint or point cite) identifies the specific page of the case you are citing. Include a pin whenever possible: your goal is to point the judge to the exact portion of the case that proves you are correct, not to irritate the judge by forcing them to slog through a forty page case.

Online, the start of each page is indicated by a starred number, such as *190 or **807. If you copy with citation after highlighting the specific text you would like to cite, your citation will generally include the correct pin.

When determining the correct pin, keep in mind these common trouble spots (Shown on the Screencap tabs): 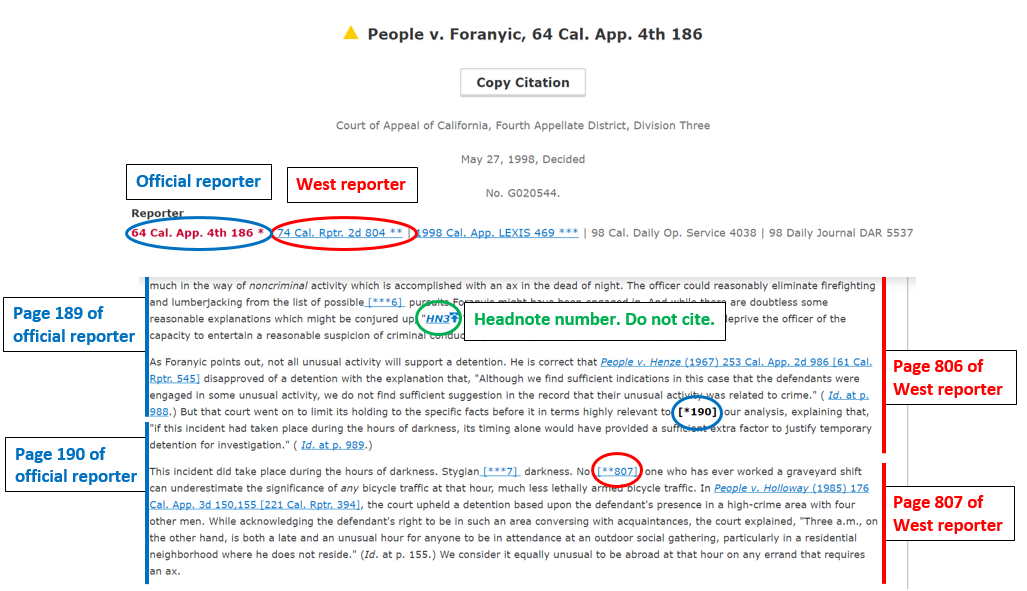 Unfortunately, there's no simple trick to memorizing all the rules but over time you'll get a feel for what looks right. If you're feeling overwhelmed, start with B10.1.1, which summarizes the rules that come up most often.

However, Cal. Rules of Court, rule 3.1113(c) and some professors tell you to cite California state court cases to Lexis' official Cal., Cal. App., and Cal. App. Supp. reporters, such as:

BT2 provides a list of court rules that require you to cite the official reporter or provide parallel citations.

B10.1.3 tells you to indicate the deciding court unless it is unambiguously conveyed by the reporter title. When providing parallel citations, omit the court if any of the reporter titles conveys the court. As with reporters, do not use spaces between single capitals but do use spaces between any abbreviation containing more than one letter (e.g. C.D. Cal.) (R6.1(a).)

Mattel, Inc. v. MCA Records, Inc., 296 F.3d 894, 908 (9th Cir. 2002) (F. publishes federal Court of Appeals cases from across the country and some older district court cases. Use 9th Cir. to indicate that this case was decided by the Ninth Circuit Courts of Appeal.)

Chaudhary v. Gen. Motors Corp., 649 P.2d 224 (Cal. 1982) (The unofficial P. reporter publishes cases from multiple states and multiple court levels. Use the Cal. abbreviation to indicate that this case was decided by the California Supreme Court. For California Court of Appeals cases, use Cal. Ct. App.)

People v. Foranyic, 74 Cal. Rptr. 2d 804 (Ct. App. 1988) (The unofficial Cal. Rptr. publishes cases from California courts of all levels. Indicating the state is unnecessary, but use the Ct. App. abbreviation to indicate the court level.)