When a bill is introduced, it is assigned a prefix and number depending on the house where it was introduced.

For example, H.R. 422, 106th Cong. means that this was the 422nd bill introduced by the House of Representatives in the 106th Congress.

H.R. Res. or S. Res. means it was a resolution rather than a bill. You may also see resolutions that are concurrent (Con. Res.), joint (J. Res.), or executive (Exec. Res.) 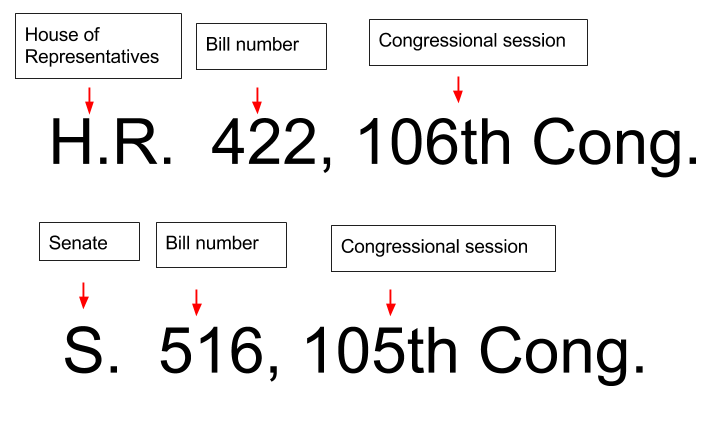 Once a bill has been passed or "chaptered," it is assigned a new "chapter" number.

The Public Law number identifies what Congress passed the law and the chapter number.

Congress occasionally assigned public law numbers starting in 1908 but did not do so officially and systematically for all statutes until 1957.  (See T1.1 of the Bluebook and Law Librarians' Society of Washington D.C., Questions and Answers in Legislative and Regulatory Research 9 (2014), http://www.llsdc.org/assets/sourcebook/legis-q-and-a.pdf#page=9.)

Finally, you will sometimes see citations to private laws- laws that benefit a specific individual but do not apply to the public as a whole. Most commonly, private laws provide immigration relief to someone particularly sympathetic or well-connected. For example, as of July 2017, the most recent private law was Priv. L. No. 112-1 (2012), which removed immigration sanctions from 26 year old Victor Chukwueke, who had been abandoned by his parents in a Nigerian orphanage due to his life-threatening tumors, been brought to the U.S. at age 15 by a nun, overstayed his visa while receiving extensive surgery, and was pursuing a medical degree to help others like himself.