How California Cases Are Published

Almost all California cases are published in two competing sets of reporters: 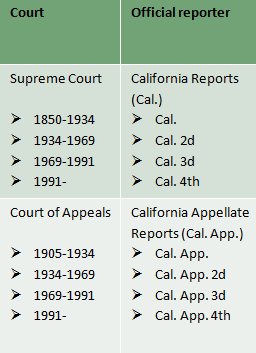 Cases are decisions made by courts in lawsuits or criminal prosecutions. Cases interpret and apply statutes and regulations and may also create and refine "common law" (laws created solely by the courts.)

Sources of California cases include:

Sources of California dockets and court documents include: