Each court generally has its own system for assigning docket numbers, which may include some or all of the following:

To learn how a specific court assigns docket numbers, check:

Common sources of confusion include:

California Supreme and Appeals Court docket numbers are assigned uniformly throughout the state, but each county has its own system for assigning docket numbers and the formats vary widely.

Check the individual county court website or Westlaw for details on how counties outside of LA assign their docket numbers. 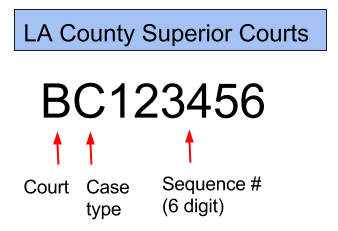 By consulting the LA County Superior Court's case number prefix matrix, we can tell the above docket is in the central district (B) is a civil case (C) and has the sequence number 123456.

Each circuit and district assigns docket numbers independently but uses the same basic format. As a result, the same docket number may be assigned to different cases in different courts. For example: 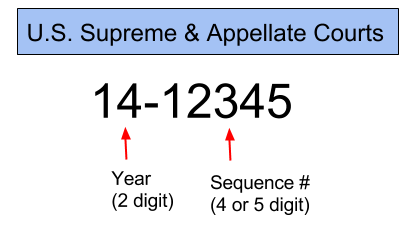 The docket number above tells us that this case was filed in 2014, with the sequence number 12345. It might be from the Supreme Court or from any Court of Appeals- based on the docket number alone there is no way to tell.

The docket number above tells us that the case is from a district court that has been assigned the number 2 within its district, was filed in 2014, and is an adversary proceeding in bankruptcy court, with the sequence number 123456. It might be from a court in any district- based on the docket number alone there is no way to tell.

When searching for a docket, skip any letters or numbers after the sequence number. These are not officially part of the docket number but simply local notes, typically the judge's initials and sometimes information about the type of case. For example:

For details on court numbers, case type abbreviations, and local notes, check the court's website, such as the California Central District's district court website (scroll down to Case Naming Conventions) and the bankruptcy court website.